The Yulin system is a single star system with a yellow dwarf, six planets and a asteroid field at the ede of the green band, the system is controlled by the Banu Protectorate. There is currently no announced date for the system to be implemented to the Persistent Universe.

An iron planet that has been mined of anything worthwhile. Now its best known feature are small impact craters and mining scars that cover the planetside.

An uninhabitable prismatic smog world with a particularly colorful atmosphere.

Considered a relaxing resort world by the Banu, this planet's atmosphere is lethal to Humans. The Banu have built a sealed arcology in a picturesque location to encourage Human vacationers to experience this world's strange beauty of ammonia oceans and black vegetation.

An arid desert world that the Banu have left uninhabitable. Instead, the Banu utilize the planet's bizarre rock formations, some of which reach the cloudline, as natural obstacles in a race track.

A gas giant whose outer atmosphere is composed of almost pure hydrogen.

itting high in orbit, Yulin II's atmosphere provide a stunning kaleidoscopic backdrop to this popular arena where Banu gather to watch one of their favorite Human sports.

This cluster of stations and ships near the system's star is Yulin's most populous area. Bustling markets cater in trade and vice of all sorts, making it a popular destination for Humans and Banu alike. 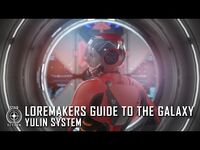