The Xi'an (pronounced : / SHEE-ahn /)[1] are among the more advanced of the spacefaring races in the 'verse. They are the masters of diplomacy, patient and refined, but can and will throw down if the situation calls for it. They live for centuries; for this reason, propagation of the species is carefully monitored and directed by the government to prevent overcrowding. While their placid demeanor can often be interpreted as aloofness or apathy, their long lifespan means that they act with decades in mind, not years.

The Xi'an are the second alien race to be discovered by the UEE, the first being the Banu.

There is less crime per capita in the Xi'an Empire than in the UEE, but it still exists. The Xi'an pride themselves on having ‘dignified’ criminals, since acting from emotion is seen as a sign of weakness and immaturity. So criminals within the Xi’an Empire are similar to the syndicates within the UEE, sprawling disciplined organizations whose business happens to be crime.

There are Xi'an pirates and smugglers but they tend to be younger, still in their rambunctious phase of life. These pirates will usually hunt in UEE territory, but they will rob their own kind if the cargo’s right.[2]

Shē’sueren – literally “Hello and Greetings with Peace.” This is the formal greeting and meant to only be used among close friends or with trusted business partners or in the hope of establishing a bond. Use of this phrase in a casual manner or when approaching a situation with tension or duplicity will immediately marginalize you in the Xi’an’s eyes. One could argue that it’s a pledge of truth and honor as much as a greeting.

Chac – A casual hello. To be used among peers or to subordinates. Use of this phrase from a subordinate to a superior or to a Xi’an of a higher caste than you will cause offense.

A majority of the Xi’an can be quite forgiving when it comes to minor social infractions. They understand that, more often than not, it is not intentional and appreciate the effort to learn their customs. But if you find yourself offending a Xi’an, you don’t have to worry. They won’t get angry or try to kill you. The Xi’an find such displays of emotion to be immature. They will simply shut down and become curt, succinct, and intractable

Most of these social rules only apply to the first several meetings. Once a bond of trust or friendship is established, the Xi’an are quite forthcoming and relaxed.[3]

To Humans, Xi'an culture can seem rigid and lifeless. A majority of that is artifice. The Xi'an present themselves as polite but neutral, particularly to those they have never met before. This is an age-old social testing mechanism. They approach a person as a blank-slate and let the other person set the tone (or tip his or her hand) as to how the interaction will progress. When a Xi’an feels comfortable with a contact, they will begin to lose the artifice and relate on a more personal level. With Humans, it takes a little longer (as we said before, a lot of them remember the Messer Era).

There is a definite “us versus them” mentality within the Xi'an society. They will not hesitate to take another Xi'an's side over an outsider unless definitive evidence is presented to support the outsider’s claim or accusation.

It is not unusual to see Xi'an within UEE space, usually falling into three categories: visiting Xian businessmen or dignitaries (as described above), younger Xi'an who haven't quite settled into the Xi'an culture, and expatriates.

There are those within the Xi'an Empire who felt that their way of life was too stifling, welcomed Humanity's ‘childish’ emotions as a breath of fresh air and expatriated into the UEE. Some went through the arduous process of becoming Citizens while others enjoy the relaxed civic responsibility of Civilian life.[2]

The Xi'an keep cat-like creatures as pets, nicknamed the ngii or yao'yao.[4]

The Xi'an can be quite standoffish at first meeting, though will warm up over time.

The state religion of the Xi'an is Li'tova, which is centered in the Kayfa system. Kayfa II is the seat of Li'tova, and humans believe that this is because the Kayfa II day is the same length as the Xi'an year. A dedicated adherent to Li'tova will pray for one full day on Kayfa II, about 128 Earth years and raise a centennial bloom.

Li'tova is centered around nothingness and the void. Xi’an who follow the religion are very concerned with their impact on the universe. Encourages the asking of questions, scientific exploration, and the contemplation of time.[5]

There are scattered alternate belief systems but they tend to offer moral guidelines or promote universal spirituality rather than worshiping specific gods.[2] 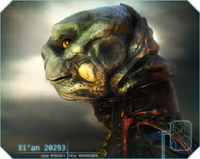