Star Citizen Wiki
Register
Don't have an account?
Sign In
Advertisement
in: Outlaw factions, Factions in the Pyro system, XenoThreat

View source
This article is about the organization XenoThreat. For the in-game event in 2021, see Assault on Stanton.

XenoThreat
XenoThreat is a Human violent outlaw group from the Pyro system mostly composed of former members of the UEE Navy.[1] The group strives a violent anti-alien and anti-corporate ideology and until 2949 had its activities limited on the Pyro system. XenoThreat started branching out to the connecting systems, first with small raids and then eventually started a organized invasion at the Stanton system known as Assault on Stanton.[2][3][4]

In 2951 XenoThreat attacked a civilian transport convoy in the Stanton system that was destined for the Terra system, all ships were destroyed and the crews executed. The UEE Navy mobilized the Civilian Defense Force to recover cargo from the wrecks and to defend the system against XenoThreat. The firefights lasted 11 days and XenoThreat eventually withdrew back into the Pyro system.

XenoThreat again invaded the Stanton system using similar tactics as before but had to retreat after 14 days.[5] 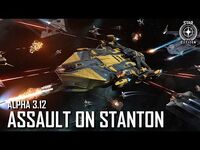 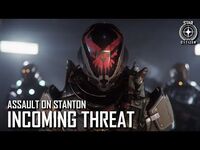 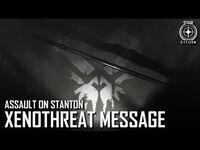