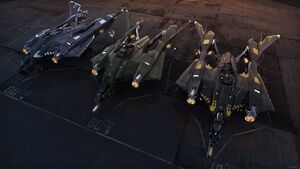 The Aegis Dynamics Vanguard, originally known as the 'Bulldog', is a Twin-Engine Deep Space Fighter.[1] Deep space fighters are typically used to pursue engagements in outlying areas when support from a carrier is not available. The Vanguard can be modified to a different variant with Battlefield Upgrade Kits.

The A3G Vanguard is the United Empire of Earth’s dedicated deep space fighter. Initially developed as a bomber-destroyer, the Vanguard is a hard-charging bulldog of a ship which features extensive forward-mounted weaponry designed to tear through the shields and armor of other spacecraft. Four high-caliber forward laser cannons and a massive central Gatling gun(Warden variant) give the Vanguard an unprecedented amount of sheer striking power. So-named because their multiple-jump range allows them to form the forefront of any military expedition, Vanguard have seen extensive service against the Vanduul.

The Vanguard trades the maneuverability of the Hornet, F8A Lightning and Gladius for extended range, armor and durability. With more hardpoints and increased space for onboard computer systems, the design can boast improved radar and a credible electronic warfare suite(Sentinel variant). In combat, the Vanguard’s roles are extensive: long range jump scout, extended duration patrol/reconnaissance ship, fighter-bomber (when equipped with torpedoes), tactical command and control ship, bomber interceptor and, in the proper hands, even a fighter-killer. The Vanguard’s extensive range can allow for missions lasting days or even weeks. Internally, the ship is fitted with sleeping berths and reclamation facilities to support such missions.

With a notable silhouette, the Vanguard is best known for its distinctive twin X-Forge engines, which allow for both an impressive top speed and an extensive backup system for enhanced combat survivability. Coupled with a superstructure composed from a distinct tungsten alloy, more than one Vanguard pilot has returned to base with little more than a single engine and the charred remains of a fuselage.

Vanguard units have been assigned to both planetary bases and aboard larger space stations. The fighter’s legendary durability allows it to operate in all-weather conditions with limited maintenance and makes it particularly beloved by the hard-fighting UEE Marines, who make frequent use of its ability to comfortably operate from makeshift combat bases.

The Vanguard Sentinel (Electronic warfare) is oriented towards causing confusion on the battlefield. From EMP pulses to command and control interference, the Vanguard Sentinel will support battlefield operations by making it all that much harder for opponents to stay in contact and have proper information.[3][2]

The Vanguard Warden is the base version of the Vanguard series. The Warden is suited for dogfighting and exploration. It is the only variant with long term life support and beds – escaping in this will give an improved chance of being recovered. The escape pod of the other variants will only give slightly improved chance over standard ejection.[3]

The Vanguard Harbinger, Sentinel and Warden

The Vanguard Harbinger, Sentinel and Warden