280.00 $
The Vanguard Harbinger is a medium-sized 2-person bomber from Aegis Dynamics. It features a room module that will in a future patch be interchangeable with one of three different modules.[1] The weaponry includes the torpedo bay in its standard module that also houses a manned missile turret, four bespoke weapon hardpoints on the nose, one weapon hardpoint on the chin, and four missile racks. 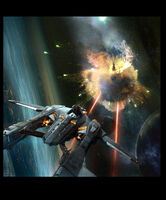