330.00 $
The Valkyrie Liberator Edition is a special edition of the Valkyrie, a small sized military ship manufactured by Anvil Aerospace. Key feature of the Valkyrie is troop deployment with the two 10-man troop compartments and a vehicle hangar that can hold a vehicle the size of one Ursa Rover. Side opening doors are located on port and starboard side with a YellowJacket GT-210 Gatling mounted to it to secured troop deployment.

The Valkyrie Liberator Edition was made available for a limited time during CitizenCon 2948.[1] 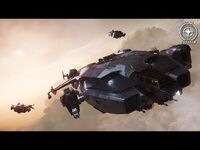