50.00 $
The Ursa Rover Fortuna is a special edition of the Ursa Rover, it is a two-door six-wheel drive exploration land vehicle made by Roberts Space Industries. It has a retractable turret and four jump-seats in the cargo bay. It comes with the Constellation Phoenix Emerald.

Armament
The retractable turret can be rotated 360° and is operated by the driver or passenger either as a fixed gun or in turret operator mode. It has two size 1 gun hardpoints and is by default equipped with two CF-117 Bulldog Repeater.

Cargo bay
The cargo bay has a retractable ramp, four gun racks and a locker. 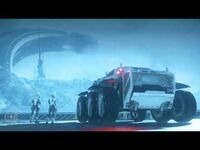