The Tyrol system is a unclaimed binary star system with a Subgiant and a White dwarf and seven planets and also three jump points.[1]

Located near the Banu Protectorate, Tyrol is a powder keg. One of the stars in the binary pair has entered the sub-giant phase of its evolution and scientists are predicting that it will go nova soon. Therefore, the UEE has designated the system as a scientific/research zone, allowing the scientific community to set up to record the effects of a nova up close.

This also means that there is no real law presence in the system. If you can avoid the scientific research stations, you can find all sorts of disposable settlements on the planets. Most of them are used for smuggling operations while some are simply squatter camps, looking for free real estate before the system explodes.

Tyrol V currently hosts the most organized settlement, known as Haven. The planet surface is burned out from the star’s initial evolution to the sub-giant phase and most humanoids require some kind of thermal shielding in their clothes in order to avoid blindness and sunburn.

Haven is built into the rock of a vast canyon in an effort to keep the temperature down. What started as a small network of tunnels expanded as more fugitives, criminals, expatriates, and outlaws decided to roll the dice and hide in a dying system. 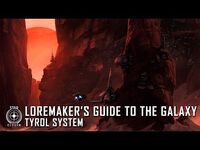