Tohil system is a multi-planetary system with four planets and a single star, and the system also has three jump points. The system is under control of the UEE.

The early 28th century was a tumultuous time for the UEE. Almost two centuries of increased military tension with the Xi’an had exhausted the Empire and stretched the Navy dangerously thin along the Perry Line. Far away on the opposite side of the UEE, the military was also dealing with the emergence of the Vanduul. Meanwhile, cracks in the Messer regime’s grasp on power were becoming clear. Imperator Samuel Messer VIII, notorious for his penchant for brutality, was assassinated in 2715. His sickly older brother Galor ascended to become Messer IX amidst much controversy and concern that he was in no condition to run the Empire.

During all this uncertainty, the Tohil System was discovered in 2716. The chaos of the era kept the UEE from establishing a presence in the system, and few could have predicted how strategically important the system would become. In the meantime, however, that lack of presence allowed outlaws to gain a foothold in the system, and it established a reputation as a smuggler’s haven that exists to this day.

Today, Tohil III’s important place in history and its unique ecosystem make it a fascinating destination for more adventurous travelers.

In 2716, two small-time smugglers found themselves adrift in Nyx. Aadya Firmino, the daughter of a prominent Terra-based construction magnate, had left her comfortable upbringing to seek adventure. She escaped her entitled ennui in a Constellation and eventually hooked up with Oisha Suen, a skilled pilot and mechanic. Together, they ran low-level smuggling missions out of Levski until the People’s Alliance’s discovery of Aadya’s increasingly brazen attempts to expand their criminal enterprise led to their exile.

Unsure where to head, they allowed their Constellation to slowly drift through Nyx’s dark nebula as Aadya strategized their next play and Oisha tested a scanner she’d just fixed. At first, Oisha assumed the strange scanner readings were due to an error on her part. Further investigations revealed that wasn’t true; she had discovered a new jump point that took the ship into what would become Tohil.

Aadya and Oisha reveled in their good fortune and debated what to do with their discovery. Aadya claimed to have trustworthy associates with serious scanning gear that could help them assess what riches might be in the system. They agreed it’d be best to know what they had discovered before figuring out what to do with it.

The two traveled to the Bremen system to rendezvous with these associates, and the night before the meeting, Aadya and Oisha celebrated in style. Oisha awoke the following day with an insufferable hangover to discover that Aadya had disappeared. Soon reports that a new system had been discovered flooded the spectrum. They all credited Aadya alone for the find and portrayed her as an explorer who left a luxurious upbringing only to make the discovery of a lifetime.

Devastated by the betrayal, Oisha went to the Terra Gazette for a lengthy, tell-all interview. She described her role in discovering the system and presented evidence, including numerous spoofed regtags the Connie used on smuggling operations, that undercut Aadya’s narrative. The scandal became a spectrum staple, as Aadya first denied the accusations and then attempted to escape scrutiny when her story fell apart. The story eventually lost steam and a subsequent investigation by the Department of Transportation and Navigation awarded credit for the system’s discovery to both Aadya Firmino (since it was her ship) and Oisha Suen (for being the first pilot to successfully navigate the jump point), while the Advocacy issued warrants for both their arrests.

Meanwhile, military pathfinders entered Tohil and scanned the system. They discovered it was light on resources and lacked any easily habitable planets. Another negative was that the system could only be entered through the unclaimed Nyx System. With more pressing issues concerning the Empire, the UEE passed on claiming the system.

Pulled Into The Perry Line[]

A few years later, a Navy recon patrol of the Oya system discovered a jump point leading into Tohil. Suddenly the system was connected to the Perry Line, a series of systems that formed a no man’s land between the UEE and Xi’an Empire during the cold war. The military deemed the system vital to the Empire’s security interests, and in 2721, it was formally claimed by the UEE. The military named it Tohil after an ancient god of war to officially align it with the other Perry Line systems. Forces were moved into Tohil in preparation for a possible Xi’an invasion or to be used during any potential offensives in the Oya System.

Military activity within the system eventually led to the discovery of another jump point. This one connected Tohil to the Virtus System, which already had a Xi’an presence. Following the discovery, the military ran the numbers and determined that they lacked the resources to establish and maintain a presence in the system that would be able to guard both jump points. Complicating matters was the fact that reinforcements were two jumps away and would have to pass through Nyx before responding to any threat. Surrounded by uncertainty on all sides, the military pulled their forces back to Castra and set up a network of proximity sensors near Tohil’s jump points that they monitored and maintained.

The military’s reduced footprint opened the door to outlaws. Those who didn’t feel like blending in with the Levski revolutionaries flocked to the system. In particular, smugglers flourished after discovering that the floating botanical biomasses on Tohil III were strong enough to use as landing zones. The system’s connection to Virtus even became the safest smuggling route between the UEE and Xi’an Empire. Untold amounts of contraband and even anti-Messer revolutionaries flowed through Tohil.

By 2789, the system was considered safe enough from the Messer regime’s prying eyes that it was the location of a secret meeting between Terra Senator Terrence Akari and the young Xi’an Emperor Kr.ē. The two negotiated a peace treaty that promised an alliance if Messer and Earth decided to make a military move against the Xi’an, showing just how toothless the ruling regime had become. It was a crippling blow the Messers would never recover from, and three years later, the outrage over the Massacre of Garron II finally ended the despotic regime.

Miners hoping to hunt resources in Tohil’s dense asteroid belt must exercise caution. The belt is replete with hiding spots frequented by smugglers and outlaws, who have been known to set traps and deploy fake distress beacons to lure ships into an ambush.

Tohil II is settled into an orbit just inside the system’s green band, this rocky, mesoplanet is subject to intense solar winds that scientists theorize have slowly stripped away its atmosphere over many millennia.

Tohil III is a naturally habitable ocean planet that lacks any significant landmass. This made UEE bureaucrats question whether populating it was worth the effort and expense. It also lacked the wealth of natural resources that made Nemo so appealing. These factors ultimately played into the UEE’s original decision to not claim the system.
What Tohil III does have is one of the most interesting and unusual ecologies in the known universe. The water is dotted by massive botanical biomasses that are essentially floating islands. Flora flock above and below these moving masses, while numerous epiphytic species anchor themselves along the island’s tangled roots and branches. The plants that comprise these gigantic tussocks are unlike anything discovered elsewhere. So far, all experiments to get these biomasses to grow in a lab or on another world have failed.
Legend has it that it was a damaged smuggling ship that first attempted to land on one of these “living islands.” Word quickly spread in the smuggling community that these plants were strong and sturdy enough to support ships and even structures. Smugglers kept the secret to themselves and used these islands for dead drops or as hideouts for years.
The rest of the Empire finally learned about this planet’s incredible ecology in 2789 when Terran Senator Akari secretly met with Emperor Kr.ē on the island known as Lemuria. Images from the meeting portrayed the location as a tropical paradise sans the sand. Following the fall of the Messers, tourists flocked to the planet and upset the outlaws who preferred the planet’s previous anonymity. As the UEE’s footprint expanded, most outlaws were forced to shift their operations elsewhere.
Though Tohil III is not a recognized planet, the UEE has imposed strict construction restrictions following the destruction of Amidon Island in 2847. At the time, it was one of the planet’s largest and most populous landing zones until the plants that supported it quickly withered and sank into the sea. Since so little is known about the life cycle of these plant islands, there’s still vigorous debate within the scientific community over whether our presence was a significant factor in its destruction.

The system’s final planet Tohil IV is a frozen Super-Earth that sits well outside the green band. The planet’s most notable feature is a surface pockmarked by frequent meteor and asteroid strikes. Few take the time to visit this world, which has reportedly made it a favorite among some smugglers who’d rather not venture into more populated parts of the system.

Initial scans of the asteroid belt ignited hopes that it would be a mining motherlode, but subsequent scans dashed that dream. Small pockets of valuable resources can still be found here, but the consensus among larger-scale mining operations is that extracting them is more trouble than it’s worth. Today, this dense asteroid belt is best known as an excellent hiding spot for outlaws. 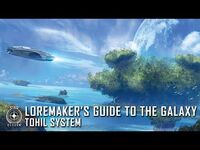