This article isn't about the "Terra system" as a whole, but rather about one planet named Terra. The formal name for the solar system that Terra sits in hasn't been described in the lore, yet.

Terra is considered a "super earth" due to its size and environmental similarities to Earth. In fact the planet was given the name Terra because of those naturally existing similarities, such as an oxygen-based atmosphere, indigenous vegetation, vast oceans, and temperate climates. 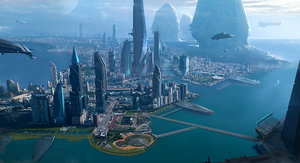 Terra is the center of operations for the UEE's Eastern Expansion Program[2] and a trade hub due to its five jump points. It is believed that a sixth one may exist.

The alien races that inhabit the Eastern sectors are generally friendlier than the aliens adjacent to the Western sectors.

New Austin, another initial colonization point, is as close as Terra comes to an industrial city. New Austin is a business park writ large, home to corporations like Origin Jumpworks and Cronus Devices. The cost of living in New Austin is lower, leading to more of a “blue collar” sensibility, but moneyed compared to other worlds. The centerpiece of the city is The Old Hall, a former Miner’s Guild meeting area now populated by factory owners, pilots, haulers and shippers.[7]

The capital city of Terra is Prime, a beautiful bayside megacity built on the foundations of two of the original colony ships. A stark contrast to Earth’s metropolises, everything in Prime was planned by the original settlers, leading to a much greater balance between nature and civilization than is found elsewhere in the Empire.

Unlike many cities, Prime’s primary landing zone is located away from the city to reduce pollution and air congestion. A monorail runs pilots to and from their hangars. Don’t let the relaxed atmosphere fool you, though: Prime has everything New York or Moscow does, from ship upgrade stores to black market opportunities. The city itself divides into two major regions: the sparkling Downtown and the lower class residential region known as The Block. Opportunities for visitors are available in both portions of the city.[7]

Terra’s second-largest city is Quasi, in the colder southern hemisphere. Quasi is built into the shadow of the massive ruins discovered early in Terra’s exploration. Quasi is considered more of a tourist destination than Prime, although several corporations operate in the region. Crusader Industries, best known for its facilities in Stanton system, operates the Platinum Bay landing facilities.[7]

Add a photo to this gallery

Retrieved from "https://starcitizen.fandom.com/wiki/Terra_(planet)?oldid=64603"
Community content is available under CC-BY-SA unless otherwise noted.