The Tayac system is a system near Xi'an space that is best known as the location of the The Ark. All three planets in the system are inhabitable.

Discovered during the early 26th century Eastern Expansion Program, the G-Class Main Sequence star system was first visited in 2524 by a UPE pilot further exploring the Terra jump point to Magnus. Home to three planets and an asteroid belt, the system, then known as 368A, was classified by surveyors for commercial development, with the innermost planet noted as a potential terraforming candidate.

Initial steps for terraforming 368A.01M (Tayac I) began in 2539. However, before the process could be completed, Humanity’s first official inter-species war erupted in 2541. As the battle against the Tevarin stepped into high gear, all non-essential projects were canceled in order to focus on expanding the war effort and strengthening the Naval fleet; the terraformation of Tayac was one of the projects included in the cutbacks.

The system remained relatively untouched until the conclusion of the war and rise of Ivar Messer to the role of Imperator. With Messer’s expansion of the Empire's control, Tayac was made a military system, declared off-limits to civilian traffic, and all known jumps into the system were shut off by Naval blockades. After Messer's Regime came to an end the system became accessible again.

A reminder that the Ark and its immediate surroundings are considered neutral space as accorded by the Ark Treaty, and the UEE does not have jurisdiction there.

After experiencing the high cost of the Tevarin war, particularly his own experiences on the front line, Ivar Messer was eager to develop weapons that would enable the Empire to end future conflicts swiftly and with minimal loss of military personnel. Under his rule, dozens of highly classified blacklist initiatives, proposals and research projects dedicated to mass destruction were quietly established and generously funded. One such project, code named Vespa, was the brainchild of Dr. Thessaly Tayac, who believed that terraforming technology could be adapted for weaponization. The half-finished terraforming of 368A.01M was selected as the perfect test environment and in 2546, the small rocky planet was assigned to Dr. Tayac for experimentation. For the next several decades, the planet was systematically terraformed and then de-terraformed, eventually transforming a planet with great potential into a desolate rock with zero atmosphere. Though Dr. Tayac was able to successfully reverse the terraforming process, his team was never able to weaponize the technology.

The problem was two-fold: size and time. The orbital platform needed to destabilize the planet’s biosphere was of considerable size. It was impossible to imagine a scenario where the Navy would be able to safely maneuver such a platform into place over a hostile world under battle-like conditions. And if they ever did manage to move the platform into a suitable position, the destabilization process was not a quick one. By the time Dr. Tayac passed away, considerable strides had been made, but not enough to make the project feasible for actual use. After the doctor’s death, the reins of Project Vespa were passed on and the work continued in the system that was by then commonly referred to among Navy personnel as Tayac. Despite generation after generation of Messers eager to see Vespa come to fruition, the hurdles were just too insurmountable. By 2750, Tayac I had become increasingly unstable from the experimentation and could no longer be terraformed, while interest for the project had dried up along with funding. Vespa was officially shut down and Tayac System all but shuttered.

It wasn’t long afterwards that the political winds of the Empire shifted and toppled the Messers from power. In the upheaval that followed, the experiments of Dr. Tayac became public knowledge. Not only was it a shocking revelation of what the Messers had been truly capable of, but it put a significant strain on the still fragile peace treaty that had only just been negotiated with the Xi'an. As a sign of trust and as an assurance that the Empire of old was a thing of the past, Imperator Toi shared all of the Project Vespa research with the Xi'an government, swearing that the technology would never be pursued again.

A massive gas giant, Tayac II is known for its awe-inspiring planetary rings, which are some of the most dense in the UEE. The dark lines make for a visually pleasing contrast against the bright hued atmosphere of the planet they encircle.

Orbiting extremely close to the asteroid belt, this dwarf planet earned its nickname for appearing to be keeping a watchful eye over a flock of asteroids. It is speculated that the planet was originally a part of the belt before it coalesced and separated itself from the herd.

A sparse belt with minimal resources, the most noteworthy thing about Tayac’s asteroid belt is that it is home to an orbiting art installation that was commissioned in celebration of the Ark’s centennial. Completed in 2900, the piece, known as the Silent Song, was the joint effort between Human artist Yosef Colt, Xi'an artist Aor, and a Banu fabrication team who all lived and worked together for an entire decade. Some say that the cohabitation was a more impressive achievement than the installation itself.

Initial construction was finished in 2800, and from its earliest days the Ark has contained one of the largest public libraries and archival collections in the known universe. With no habitable planets in the system, the Ark has become the main hub of activity in Tayac, with knowledge seekers — along with services to cater to them — congregating around the library. 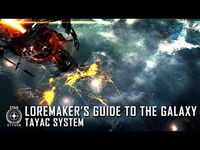