Taranis system is a unclaimed star system consisting of a white dwarf in its center and four planets in its orbit. In the system are also four jump points and two asteroid belts. Terraforming efforts on Taranis II failed catastrophically, resulting in a uninhabitable planet and destroying its moon in the process. The remains of this moon are now a asteroid field and is best known as Broken Moon.

Taranis is also the system where the Broken Moon scenario in Arena Commander takes place.[1] 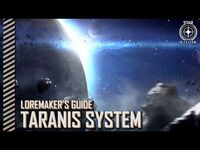