200.00 $
The Scorpius is a small 2-person crew heavy fighter made by Roberts Space Industries featuring a remote turret installed on rails that can be moved to a top or bottom position. The retractable x-shaped wings are folded backwards for landing or transport. Additionally, four gun hardpoints as well as two missile rack hardpoints are available. The Scorpius flies and operates similar to the Hurricane, but is slower and tougher along with its unique on-rails turret.

The Scorpius was first shown as a holographic model at Invictus Launch Week 2951. The ship was released in Alpha 3.17.1.

Scorpius displayed in the holo suite at ILW 2951 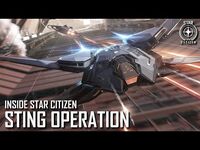