Roberts Space Industries is a ship and part manufacturer creator most well known for the quantum drive that kick started humanity’s expansion into space. They're known for their wide range of efficient and austere spaceships that serve all your needs starting at basic interstellar travel to deep exploration on the outer edges of the galaxy.

Roberts Space Industries is one of the oldest human enterprises still in operation, with a history dating back to the first journeys of humanity towards the stars in the 22nd century.

Constituted at the beginning of the 21st century, RSI developed the first autonomous quantum generator which paved the way for the colonization of the galaxy. Governments and businesses have quickly embraced this technology, and the resulting expansion has led to the United Empire of Earth that we know about.

However, President Roberts of RSI had a very different dream: a future where the stars were accessible to everyone. In 2140, his company created the first model of the Zeus, a vessel equipped with the quantum generator designed for sale to individuals.

It is these innovations, combined with technologies discovered in previous decades, that have allowed the human Empire to take shape. With such a history and the impact it may have had on the way human culture has evolved in space, RSI is of interest to historians and sociologists as well as to accountants.

The company's head office is located in New York, on Earth, and includes a display case that contains the latest ship models as well as a room in which centuries of designs are displayed, up to the famous Zeus. This exhibition area is thus both a sales space and a museum, and the huge tower in which it is located has now been part of the landscape for generations. Tradition has it that this building where the first ships were born is one of the first things we visit when we stop on Earth.

Products intended for the civilian market are the pride of RSI thanks to the efforts of the company, which owes them almost half of its turnover. Against all expectations, and despite the strong competition from upstart manufacturers such as Origin Jumpworks GmbH or Musashi Industrial & Starflight Concern, the company also continues to grow its market share. In recent years, none of them has managed to diversify to the same extent. On its own, the Constellation holds the candle to Freelancer and Starfarer together, while the Aurora remains a viable solution to the single-seaters produced by Origin. Its heavy vessels remain unmatched.

On the other hand, concerning military contracts, the reality is much less brilliant, Although RSI served as main supplier for the production of Bengal Carrier as well as other heavy vessels, it is common knowledge that this company strings failures in the context tenders organized for smaller models. The UE Navy does use a small number of militarized constellations for reconnaissance, but it has never massively adopted RSI vessels.

Recently, the company failed to win a contract worth 1.7 trillion credits for the supply of a new generation fighter, for the benefit of the F8A offered by Anvil Aerospace. Turning the knife over in the wound, RSI's offer was ranked third, far behind the Aegis Dynamics project, the Dogfighter 3000, which the UEE Navy intends to retain after modifications. The company's prototype, dubbed Black Widow, was deemed too expensive to serve on the front line, which means it probably won't be sold on the civilian market either. 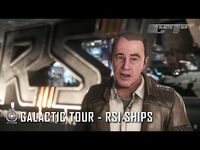