Rhetor system is home to the United Empire of Earth’s education system.[1] The system is made up of five planets orbiting a yellow dwarf, Rhetor V is the only planet not within the green band, and a total of three jump points a present in the system.

Persei is a haven for thinktanks and theoretical research. It is home to the elite government-sponsored UPARQ campus, home to the brain trust that has overseen much of the UEE’s technological advancement in recent years. As a result, access to Persie is extremely limited: undergraduates without security clearances need not apply. An elite naval guard garrison is stationed here on constant assignment.

Reisse is a stark contrast: it is the heart of the UEE’s youth movement. For six generations, Reisse has found itself on the opposing side of whatever political group happened to hold sway over the Empire. The fourth planet, Mentor, claims a similar number of students as Reisse, though the significantly colder climate seems to keep them focused on more practical studies.

Rhetor V is a beautful multicolored gas giant: you can often find local students and pilots dosing up on Color and staring at the planet. Rhetor has been preserved by the Earth Sights Trust as a national park; refueling here is strictly forbidden. 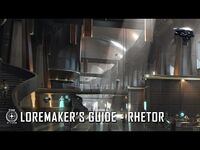