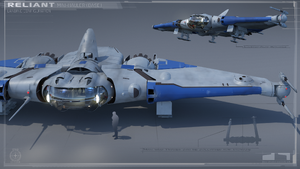 The Musashi Industrial & Starflight Concern Reliant is the third starter ship. It was built specifically to best accommodate some of the more PU-focused play-styles like Research and Reporting. It is the only starter ship with two seats.[1]

All Reliant variants are capable of transforming between a vertical and horizontal orientation. The vertical-configuration will be the ideal combat and maneuverability mode of flight because of a better spread of the thrusters. The Horizontal configuration won’t handle as well, but will have an improved top-speed over the Vertical mode. Right now it’s only planned to have you getting in/out of the seats while the ship is in Horizontal mode. The upper-seat will be the pilots chair, with the lower seat the gunner/turret operator.[1]

The Reliant Kore is the base model of the Reliant. It is specifically designed as a multi-purpose ship and has a larger carrying capacity than many ships in its class.

The Reliant Mako is designed for deep space broadcasting, the ‘News Van’ Reliant adds an Image Enhancement Suite that helps capture every moment of life in the stars.

The Reliant Sen is a science-oriented model that carries internal signal dampeners and an advanced scanner suite for discovery missions.

The Reliant Tana is the combat version of the Reliant. It trades cargo for a high-yield powerplant, stronger shields and additional weapons mounts. 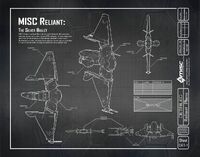 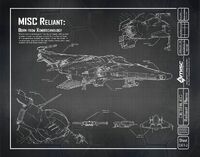