The ship was first demonstrated to various players on November 24, 2021 (Day 4 of the Intergalactic Aerospace Expo 2951),[1][2][3] one day before it was officially revealed and implemented to the PU.

Other
The crew accommodations include two beds that also serve as escape pods, a kitchen and four armor storage lockers. An airlock is located next to the bridge, capable of ship-to-ship docking (upon implementation of the feature). 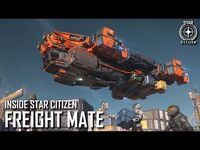