The Pyro system is a unclaimed single star system consisting of an orange dwarf, six planets, an asteroid field and seven jump points.[1]

Because of the lack of habitable planets it was not claimed by the UEE which resulted in a lawless uprising and the system became a hotspot for criminals and pirates. The Ruin Station is the only permanently habitable location. Otherwise it is rife with pirates, smugglers and other criminals. Traders beware!

The Pyro system is announced to be released in late 2022 and will use Server Meshing to achieve its inclusion.

The Pyro systems bright central star undergone a prolonged nova phase long before mankind reached for the stars and little is known of the original makeup of the system. Six burned-out planets remain, none of which are capable of supporting life. Every planet in the system is at some level of decay: from Pyro I’s slow infusion into the star to Pyro IV being knocked out of orbit in a meteor strike and slowly being subsumed by Pyro V’s gas giant.

There is little inherently interesting in the Pyro system. The planets were quickly mined out of any remaining precious metals shortly after the system’s discovery and the gas giant Pyro V is a mediocre refueling point at best, the atmosphere contains a poor hydrogen mix.

Pyrotechnic Amalgamated have established a space station typically used for terraforming in the orbit of Pyro VI, the least damaged world in the system, even though Pyro VI is an uninhabitable world. The reason as to why the orbital station was built there is unknown. Shortly after the station was abandoned it was taken over by pirates and criminals serving as a hub for black market trading.

The system has not established system-wide governance.

TRAVEL WARNING: Any improperly shielded spacecraft will sustain residual damage from Pyro’s star while making transit through the system.

A planet dangerously close to the constant, violent solar flares of the system's star.

A coreless planet that once held significant mineral deposits, a "metal rush" quickly picked the planet clean and left it an empty husk.

Scientists speculate that this terrestrial planet survived a collision with pieces of the planet-sized body that knocked Pyro IV out if its orbit.

A rocky planet that has been mined clean. Knocked out of orbit by a celestial body of equal mass, it is slowly being pulled into Pyro V.

The Ruin Station has been taken over by outlaws after Pyrotechnic Amalgamated abandoned it, since then this station is a frequent host to battles between rivaling factions. 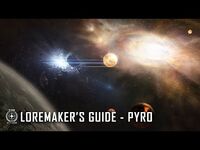