Oso system has been designated by the UEE as a developing system off-limits to interaction and trade. A small military garrison maintains this edict, although they are generally willing to look the other way for the right price. As such, Oso is regularly visited by traders of all stripes looking to ship between here and the Xi'an Empire.

Discovered in 2861 by amateur explorer Errol Navis, the system that he named after his daughter featured six distinctive worlds orbiting a white Type-F main sequence star. Oso was quickly set upon by survey teams and corporate groups seeking to lay claim to the latest worlds potentially ripe for terraforming. However within the year, interests changed dramatically. The discovery of higher life forms on Oso II forced the government to issue it protectorate status under the Fair Chance Act. The declaration immediately locked down the system, but some of the less-than-scrupulous surveying corporations leaked their planetary assessment findings. They attempted to make a case to the UEE Senate that Oso II could potentially be terraformed for Human habitation without destroying all of the indigenous life. The question of ‘uplifting’ began to circle the Empire. Ultimately, a slim majority in the Senate chose to adhere to the tenets of the Fair Chance Act. They established a permanent garrison near the system’s initial jump point to let the species develop without outside interference. Despite this, travel to the system to engage in black market trade opportunities remains significant.[1]

Osoians are the most developed of all the primitive species discovered by the UEE. A furry, multi-limbed race that communicates through flashes of color generated by chameleon cels that are patterned across their forehead-equivalents. Human scientists find the natives to be endlessly fascinating, and Earth’s universities are full of graduate students suggesting new ways to study and attempt to communicate with the Osoians. The Xi'an, however, have a more tragic take on the species: they find them to be delicious.[2]

This tidally locked planet features a lightside that is a churning sea of lava while its dark side is a cold, stark, iron-rich landscape.

Yogi Station is a observation platform to monitor all traffic in the system. 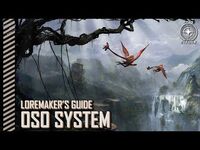