Nexus system is a single star system that has a white dwarf in its center orbited by five planets and has three jump points.

Discovered back in 2445 (present day: 2945) by Dominic Thapa, a UEE pilot, the first jump point to Nexus was located in Cathcart. At the time, that system was under strict military control and off limits to the public, so naturally, the same applied to Nexus. Initiall scans of Nexus IV revealed a healthy ammount of minerals located there, so the military decided to move in and began the terraforming process on Nexus IV and III, which was to be the headquarter for military forces in this system. Attempts were made to terraform Nexus II as well, because of its unique Nitrogen atmosphere. However, none of these showed any lasting results. Because of this failure, and the immense monetary strains caused by terraforming the other two planets at the same time, in 2468, the government decided to sell the entire system to the Hathor group in order to raise funds and also keep public traffic through Cathcart to a minimum. 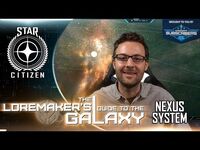