Nemo system is a single star system that has a yellow-white dwarf in its center orbited by three planets within the green band and also has three jump points.[1]

Nemo is a mid-range human-settled system centered around a tropical waterworld, Ergo. Ergo produces vast quantities of undersea oil and has been settled with a series of orbital-dropped platform cities. Although there is no denying the fact that the planet exists largely to supply other more populous systems, the Ergonians have developed their own unique culture. Unlike most water worlds, absolutely no indiginous life has formed on the planet, so visitors hoping to find an unusual fish will be disappointed.

The highlight of the Nemo system is the so-called “Space Whale.” A naturally forming asteroid located in safe orbit around Nemo III, the planetoid resembles nothing so much as an Earth whale suspended in space. The locals have taken the whale as their own, constructing a nearby tourist trap for visitors to the system. Here you will find readily available t-shirts and shotglasses with phrases ranging from the obvious “I Saw the Space Whale!” to the utterly inexpicable “Ergo, I Got Blubbered.”

Nemo II is a resource and refining world, producing a variety of mid-class alloys.[2]

A small protoplanet on a lonely orbit around the star.

A mesoplanet that's suffere multiple meteor strikes, mining operations have developed over the desolate landscape. As a result, a variety of mid-class alloys are produced here.

A terraformed ocean world, the lack of land masses forced the inhabitants of Ergo to build their cities on the water. 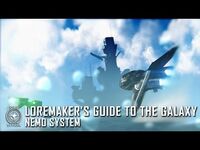