The Mustang spacecrafts from Consolidated Outland is a series of small 1-person combat and racing focused starter ships.

The Mustang Alpha is the base model Mustang.[1]

The Mustang Beta is the scouting model of the Mustang designed for long range missions. Its unique features include a living compartment with a kitchen, bed, bathroom, closet and storage compartment.[1]

The Mustang Delta is the military model, armed with 36 FFAR rockets and an infrared adaptive camouflage invisibility cloak armor.[1]

The Mustang Gamma is the high speed racing variant.[1]

The Mustang Omega is a dedicated racing model that was built using ultralight material alloys, with an additional intake, power plant and a third engine thruster. Sometimes considered unsafe, the Omega pushes power ratios to the limit; the result is a sleek, stylish spacecraft. It weighs less than the Aurora and has more options for engines and thrusters… at the expense of some stability, weapons hardpoints and cargo capacity.[1] 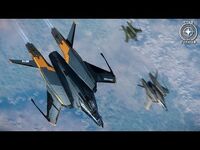 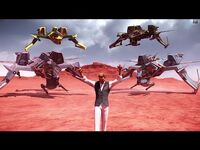