microTech is a super-Earth in the Stanton system, the planet is named after its owner microTech. Three moons are orbiting microTech as well as the space station Port Tressler in a geostationary orbit to the landing zone New Babbage, serving as a hub for travelers and commerce.

The below freezing point temperatures are the result of an error during United Empire of Earth's terraforming process, which led to unusually dense cloud productions.

Enclosed to protect the inhabitants against the freezing elements, New Babbage is a major social and economic trading hub on microTech. Although it features microTech's flagship store, the landing zone is a haven for smaller tech companies.

Named after the Greek muse who inspires eloquence to supposedly remind those gazing upon the moon from microTech to 'strive for pure expression of thought.'

Named after the ancient Greek muse of history to supposedly remind those gazing upon the moon from microTech to remember that 'their work stands on those who came before them.'

Named after the ancient Greek muse of music to supposedly remind those gazing upon the moon from microTech to be 'guided by the natural rhythm of the universe in their designs.' 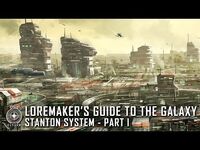 Retrieved from "https://starcitizen.fandom.com/wiki/MicroTech_(planet)?oldid=83121"
Community content is available under CC-BY-SA unless otherwise noted.