Leir system is a lawless system located on the border between UEE and Vanduul space.

Leir II, Mya, is home to the Outsiders, a fringe society that rejects civilization. Leir was a corporate terraformed world which was abandoned after cultists staged an armed takeover. Rather than retake the world it was decided to simply let sleeping dogs lie, cutting the group off and waiting for them to turn upon themselves. Surprisingly, this has not happened. The group stabilized into a thriving society very quickly and managed to fit in quite nicely on the world.

The Outsiders, who claim to oppose mankind’s arrogance and refuse to export anything from their sanctuary, now have quasi-normal relations with visiting traders. High quality made-goods can be purchased for a significant outlay, although the Outsiders still will not purchase anything from other planets. The Outsiders operate a strong local militia which operates top of the line ship hulls (apparently their one nod to offworld commodities.) Miners operate unobstructed on the other two worlds in the system. Neither are terraformed and as a result require standard deliveries of machinery, oxygen, food and luxury supplies.[1]

This small, mineral rich world, though it lies inside the green band of the system. Still, it houses a paltry mining population, who are willing to trade with haulers.

Originally known for its majestic mountain ranges, the beauty of this terraformed terrestrial planet was overshadowed by the takeover from the outriders. The radical government long refused to import anything out of fear of "infecting their pure society", though recently the rhetoric has lessened.

A rocky planet full of graphite and crystals. Though it has resources, there are no permanent settlements.[2] 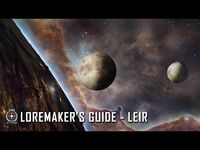