The Kiel system is a single star system with a yellow-white dwarf and six planets. The system is controlled by the United Empire of Earth.

There is currently no announced date for the system to be implemented to the Persistent Universe.

A small mesoplanet in a tidally-locked orbit around the star.

A vacant rocky planet with a thin atmosphere. Even though it's unsuitable for terraforming, the UEE has prohibited corporations from mining the planet.

A terraformed terrestrial planet that served as the hub of operations for the system, though the planet's military status was downgraded then tensions were eased after the Messer Era. Severus had difficulty attracting settlers and businesses to this formerly fortified system, but has been enjoying a recent population boom thanks to the recent Imperial recognistion.

This strikingly blue subgiant has an incredibly fast rotation, taking only 16 SEH to make a rotation.

A large gas giant composed mostly of hydrogen and helium.

This tiny protoplanet has an incredibly long orbital period around the star. 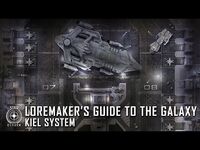