Located near Vanduul territory, the Kellog system is home to a stark dichotomy.

Xis has been designated by the UEE Subcommittee for Development & Expansion as a Developing World to a primitive species. A lush jungle paradise world, Xis would be otherwise ideal for human colonization. There is a small market for medicines and other organic goods collected with some risk on the planet’s surface. Flo-pets, the focus of a brief exotic animal fad among Earth’s upper class, were initially illegally trapped here.

Meanwhile, the outer planet in the system is the infamous QuarterDeck prison world, a maximum security penal facility home to hundreds of thousands of hardened criminals. The UEE allows prisoners at QuarterDeck to work their sentences in a full-process antimatter refinery; the fuel is thus available cheaply and raw materials involved in its creation are sometimes at a premium. Bounty Hunters should note that QuarterDeck’s booking officers are known to pay a reasonable rate for captured criminals.

D&E dictums specify that the system is not to be tampered with and so the other planets have also been declared off-limits for mining and exploration purposes. The small army of police and guards that monitor QuarterDeck ensure that no one interferes with the planets or the species on Kellog II. Should they catch someone, they certainly don’t have to take them too far.[1][2][3]

Travel Warning: The Kellog system is located near what is generally considered Vanduul territor. Although the organization of Vanduul “tribes” is still not well understood, it seems that none have claimed Kellog as their own ... yet. Although no enemy raiders have yet been spotted in-syste, travelers are advised to take extreme precautio in the region. The Kellog System consists of six planets orbiting a G2V yellow dwarf extremely similar to Earth’s own Sun.  Two of these worlds are inhabited and offer attractive trading opportunities to the interested trader: Kellog II, known as Xis, is slightly closer to the star than Earth, creating a lush tropical paradise world.  Kellog VI is at the outer edge of the system’s green band, a barely inhabitable rock which the UEE has converted into a prison world.

A visit to Kellog is not for the faint of heart. The system is ranked SIX on the galactic insurance chart, meaning that should loss-of-vehicle occur there, there is no repayment of cargo fees and upgrade replacement would be available only at a slight loss. There is nothing necessarily dangerous in the system itself, particularly for law- abiding pilots, and the rating instead reflects a simple truth: there are limited reasons an honest person should be there in the first place.

Xis is the reason for the Kellog system’s unusually high insurance rating (for a system with a distinct UEE presence). The planet is dotted with deep, multi-canopied jungles with a biodiversity that rivals anywhere in the galaxy. From a warm sea that is home to ten-foot crab monsters to rainforests that play host to millions of insects, primates and, most famously, Flo-Pets.

Few can forget the Flo-Pet craze of the previous decade: the unusual animal best described as a cross between a housecat and a jellyfish was all the rage on Earth, with the rich and powerful desperate to collect and breed them to show off their bejeweled internals. Kellog II was their point of origin, where the first of their kind was captured by an intrepid privateer who initially believed they might be as delicious as they look. (Further study has degiven nitively established that Flo-Pets are not edible ). Interest in the creatures has fallen off, and the offspring of those initial creatures can now be found inhabiting the sewers of every significantly developed world.

Visiting Xis is also strictly forbidden: the UEE Subcomittee for Development & Expansion (SDE) has identified the planet as a Developing World, citing the existence of the Orms, a primitive hominid-like species centered near the planet’s north polar regions. Orms have, in the past three hundred years, begun to develop more com- plex social interaction schema and extremely primitive stone age tool use. Although their culture is of interest to scientists (who sometimes buy equipment and preserved food depending on the season — aim for “winter”) the Orms themselves are not worthy of note for traders: they produce nothing valuable and they, themselves, are not civilized enough for use as labor.

The black market, however, is rampant. Although the planet is protected by a web of reconnaissance satellites, the UEE generally lacks the ability or the interest in properly policing the orbit. Incursions made without the proper amount of stealth are recorded and can harm a pilot’s citizen rating in the long run ... but there is little danger of running afoul of orbital batteries or encountering a stray destroyer squadron.

QuarterDeck is home to the UEE’s massive Prison World, a maximum security penal facility that incarcerates hundreds of thousands of hardened criminals. QuarterDeck is a full-process antimatter refinery, which means that the extremely valuable fuel is available more cheaply here than it is anywhere else in the galaxy. Antimatter processing is an incredibly dangerous affair and it kills dozens of prisoners a day ... but reduced sentences are given to those willing to perform the work, helping to ensure that the UEE navy and the merchant marine are fully fueled.

However, interested merchants should note that transporting antimatter is extremely dangerous. A fully upgraded cargo hold is necessary, and anyone attempting the run needs to broadcast in the clear their manifest: no pirate wants to tangle with an antimatter transport because the simplest engagement will quickly lead to an explosion killing all parties involved.

The UEE has also developed a system by which wanted criminals can be delivered directly to QuarterDeck by properly bonded bounty hunters. A Class VI JusticeStar satellite sits at the planet’s closest Lagrange Point, allowing processing, trial and sentencing to take place swiftly and efficiently. Booking officers on QuarterDeck frequently pay a premium for wanted men, reflecting the reduced cost to the UEE that comes with having prisoners delivered directly to the system.

As on any prison world, there is also an active black market. Merchants who can deliver luxury entertainments to the planet without attracting the attention of UEE wardens are handsomely rewarded. Of special value on QuarterDeck are narcotics, which much of the population prizes as the sole escape from the danger and dreariness of forced antimatter mining. 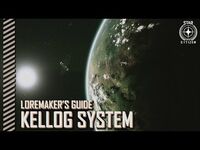