Kallis is a system still in its infancy. All the planetary masses are still forming and cooling. It’s not ideal for colonists and with the exception of some rare metals in unusual concentrations it’s not great for merchants… but all eyes are on the system in the scientific community. As such, the system has no native population or representation in the UEE Senate; it is officially governed by a panel of Imperial researchers. The system has been placed under the Fair Chance Act, in order to allow scientists an undisturbed look at the formation of a new system.[1]

The belief is that Kallis may become a jump hub as expansion into this region of the galaxy continues; canny real estate investors would be advised to purchase land deeds immediately.

A small mass believed to be developing into a protoplanet.

Sharing the same orbital path as Kallis II, scientists are eagerly watching and wondering whether one of the planets will subsume the other.

Kallis IV, survey number DXP-55.7c, has attracted particular attention because of its believed similarity to Earth at this stage of a star system’s formation. Survey teams are observing the planet from orbital stations and spy-eye recon drones twenty-three hours a day and the work is less than thrilling. The potential for studying how an Earth-like planet is formed is exciting, but all parties involved know that it will take tens of thousands of years to gather the necessary data. Black market traders might be advised that the crews manning these posts will be looking for other forms of entertainment to fill their days.

A rocky terrestrial planet without an atmosphere. It is believed that a massive meteor strike created the accretion disc swirling around this world. The coalescing debris has scientists hypothesizing that the disk may form into a moon.

A forming terrestrial, carbon planet still early in its development.

Kallis’ 7th planet, a gas giant, has been identified as a potential refueling station, although only a small Lagrange platform currently exists there. Scientists are watching this burgeoning gas giant's atmosphere closely to study storm formations.

Witnessing the formation of this ice giant is of great interest to the scientific community, as there are still debates as to the exact process. Composed of heavier metal than normal gas giants, it is currently believed that Kallis VIII formed closer to the star before being gravitationally scattered outward to its current orbit.

This small dwarf's planet surface is a barren icy tundra dotted with active cryovolcanoes that spew freezing magma into the tumultuous ammonia-rich atmosphere. Scientists theorize that Kallis IX will slowly grow dormant over the next few millennia. 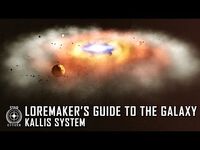