The Kai'pua system is a star system controlled by the Xi'an Empire, it consists of four planets, a star and has two jump points.

The Xi’an consider Rai.p'uāng sacred — a designation extended to the entire system, so be respectful. No violent activity of any sort will be tolerated; it will be immediately suppressed.

Kayfa's first world is a terrestrial planet with an atmosphere composed mainly of carbon compounds. From orbit, the atmosphere is a sooty swirl of black, brown and red hues. Some UEE scientists theorize that the prevalence of carbon throughout the planet and the corresponding atmospheric pressure could have given the planet a diamond substratum. Such theories remain unproven as the Xi’an government strictly forbids mining in the system.

Kayfa II is the religious heart of the Xi'an Empire, thanks to its unusual astronomical properties. One day on the planet lasts 100 Xi’an years, which roughly equates to 128 Standard Earth Years.

It is the custom in the Xi’an Empire for planets to be assigned a purpose and developed with only that purpose in mind. Kayfa II's spiritual associations mean it was terraformed to be a place of peace, tranquility and meditation. Cultivated gardens and fields cover much of the surface with sacred temples built so that there would always be one on the horizon no matter where you look. The temples provide the bare minimum in resources and amenities for Xi'an monks pursuing the ultimate enlightenment in Li'tova: spending a full day meditating on Kayfa II. To preserve the planet’s tranquility, Kayfa II has only one city, Su'Shora. The city has a small number of permanent residents, mainly government or religious officials and their support staff, who deal with visiting Xi'an tourists and religious pilgrims. Humans are welcomed but expected to adhere to the planet’s customs. Unless given special dispensation, Human visitors are also required to stay within the limits of the city.

Kayfa II's religious focus means there is no manufacturing or mining, and only essential economic activity. All other necessary products are shipped into the system by the Xi'an government. Some black market activity exists, but perpetrators caught are severely punished. The planet’s solitary, legal export is the Centennial Bloom plant, which is famous for blossoming beautiful bell flowers once every hundred Xi'an years. Originally native to Koli (Eealus III), the Xi’an discovered that these temperamental plants thrive in Tovaroh's gardens. Law grants each Xi’an one complimentary plant on their first visit to the planet. Humans can purchase them, but should not expect a discount. As a way to dissuade Centennial Bloom bulk haulers from clogging the system, the Xi’an tie the plant’s price to the going rate in the UEE. So buying a Centennial Bloom on Tovaroh simply guarantees that the plant is authentic and not one of the genetically modified knockoffs commonly found around the UEE.

The Xi'an once considered this gas dwarf as a potential candidate for platform-based colonization. The plan was squashed after Emperor Kr.ē expressed concern over how increased traffic in the system might affect Kayfa II.

Kayfa IV is the system’s second gas dwarf. Since its rocky core and diffuse atmosphere are similar to Kayfa III, some Human scientists wonder why the two planets are so far apart. Theories abound but remain unproven, including one that suggests a rogue planet slicing through the system pulled Kayfa IV out of its original orbit. A recent request by an assembly of Human and Xi’an scientists to study the planet in greater detail was rejected by the Xi’an government. 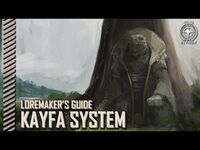