The discovery of Kabal was certainly something new. By all outward appearances, the system seemed empty. It was only during when a UEE Surveying team began to assess Kabal III, did they find something disturbing; old uninhabited Tevarin cities. How could an entire Tevarin system escape detection all these years? Did the Tevarin that were assimilated into the UEE know about it? How was it kept a secret? The questions multiplied when a detachment of Marines, sent to secure the planet ended up discovering a cache of old Tevarin war machines. Among the rows and rows of weapons, they made an even more disturbing discovery; some of the technology was made in the last ten years.[1] 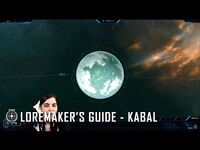