A Jump Point is a natural space-time anomaly, or wormhole, that connects through interspace to other systems, allowing near instant travel between them.[1][2]

Without them, Faster-than-Light (FTL) travel would be impossible. Any efforts to get to other systems would take decades, if not centuries, even with ‘Quantum Drives’ that can accelerate to 0.2c (20% the Speed of Light). All known spacefaring species are restricted by this limitation, with no technological alternatives to achieve FTL currently known, and so use the Jump Points.[source?]

The anatomy of a Jump Point consist of two major parts that form the wormhole. The pair of anomalies that exists within normal space-time, the Jump Point itself or Jump Gate as it is sometimes referred to, one located in the system of origin and the other in the destination system. As well as the tunnel through ‘Interspace’, or warp tunnel, that connects the two points.[3]

Each discovered system has at least one Jump Point, but many have multiple connections forming a network making up the known regions of the galaxy.[source?]

Only a small fraction of all the systems within the galaxy are connected through the known Jump Point network. Some are thought to lack Jump Points entirely and are rendered unreachable. Many, however are simply undiscovered. This fact has lead many individuals, corporations, and governments to actively pursue space exploration endeavors to scour the limits of known space looking for these untouched avenues. All of them hoping to find an undiscovered Jump Point that will lead to new worlds and untouched spoils for them to plunder, or sequentially sell the invaluable data of its location to the highest bidder.[1]

With the start of the the Anvil Carrack Concept Sale[5] on November 28, 2014, CIG released a small exploration mini-game on the RSI Website. The game entitled "Into the Unknown: A Carrack and her Crew"[5] challenged players to scroll down the page, or explore the Nul system, while making difficult choices that would effect their ability to venture further. One of the rewards for completing the game was a concept of a Carrack entering what appears to be a Jump Point.

The release of the RSI Constellation Commercial[6] on August 15, 2014, gave a glimpse of the art effect of exiting a Jump Point. Other information on Jump Points in the trailer was given through dialogue. The announcement made by the ship's computer, "Exiting Interspace", referring to the Aquila leaving the Interspace tunnel of the Jump Point. As well as the response, by who is presumed to be the Navigation Officer, to the Captain's question, "Did we get it?" "Jump Point is charted, sir" indicating that the ship was monitoring and recording the successful flight data.

Concept of a Carrack Entering a Jump Point (November 2014) [Into the Unkown: A Carrack and Her Crew] 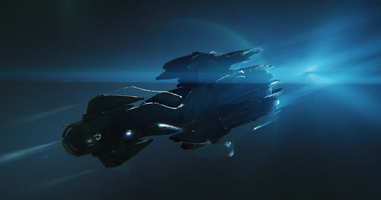 Retrieved from "https://starcitizen.fandom.com/wiki/Jump_point_(gameplay_mechanic)?oldid=37272"
Community content is available under CC-BY-SA unless otherwise noted.