The Invictus Launch Week 2951, ILW 2951, was held May 21 to June 1, 2021. During the event various space ships and land vehicles could be rented for free from the exhibiting companies at the expo in New Babbage. The Javelin-class UEES War Hammer docked at the planetary space stations and offered tours. Drake Interplanetary is, because of their negative history, the only manufacturer that is not directly participating at Invictus but instead showcased its ships at DefenseCon 2951.

Invictus is an annual event that celebrates the graduation of the latest class of UEEN officers and pilots, and also the beginning of a new class of recruits.[2] In addition manufacturers showcase their ships and vehicles at a expo.

Reveal of the RSI heavy fighter Scorpius at one of the holograms on the lower floor. stock limited sale of the Constellation Phoenix.

Stock limited sale of the Idris-P, Idris-K and Javelin. The Redeemer was displayed on the show floor, but it could not be entered, miniature fully-textured holograms of the Nautilus Solstice Edition and Vulcan were displayed in the holo suite.

All ships previously offered as free rental are offered again[3] at the Drake DefenseCon 2951.[4] Stock limited sales of the Kraken, Kraken Privateer and Kraken Aftermarket Kit.

As part of the celebration the UEE Navy has a naval parade in space, the fleet will have a Javelin among other ships. The fleet will visit space stations in alternating order and the Javelin will offer a tour on board.[5]

During Invictus Launch Week a selection of space ships and ground vehicles can be rented for free for a duration of 48-hours[4] from the exhibiting companies at Tobin Expo Center in New Babbage, microTech.

Ship sales, limited to 1 per account, of ships with limited availability. The ships will be offered at three waves each and are on a first come first served principle.

A F8A Lightning of the 999th Squadron 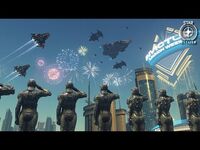 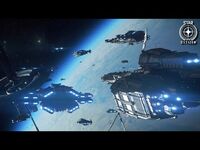