The ship was released in Alpha 3.2.0 and is not permanently offered on the pledge store but can also be obtained as a reward for 500 successful referrals.

The gunner sits in the rear in a separated canopy, the turret is equipped with four 11-Series Broadsword Cannon.

In 2607 the Hurricane was built for the Second Tevarin War by Casse Aerospace but was only used in a limited capacity. Anvil Aerospace is now the manufacturer after winning a UEEN contract bid to remake the Hurricane and deployed the first ships in 2878 for the Vanduul conflict.

Hurricanes are also prominently used in criminal organizations, the Argul Dawn use them for raiding supply ship convoys and the Otoni Syndicate became notable for a high scoring heist stealing high-value ore destined for ArcCorp. [1]

A formation flight of 5 Hurricane fighters

Pilot's cockpit of the Hurricane

Pilot's cockpit of the Hurricane

Rear view and turned on engines of the Hurricane

Rear view and turned on engines of the Hurricane

Concept art of the Hurricane

A squadron of Hurricane fighters taking off

Fighting against the Vanduul

View from the gunner seat 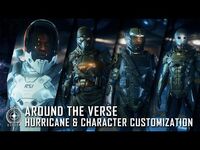 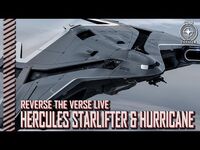 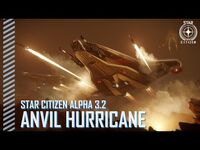