The Humans are a recent species in the history of the galaxy which entered space travel less than a millennium ago. Also called "Humanity" to designate all the individuals of the human species, it is known for its individuality and the plurality of its culture. Humans are suspicious of everything unknown to them, which has always led to tensions when they first meet other species.

Although not a culturally warlike species, Humanity has a long history of conflicts within its own species, for racial reasons (the physiognomy / human morphology being surprisingly changing according to particularly flexible rules of adaptability to the environment in which it is found) and territorial. All of this was almost completely wiped out when the era of space travel came, which made humans aware of their status as advanced species, and put an end to the trivial conflicts which agitated them for community and territorial.

From this moment, the Human organized politically and socially as a single entity (previously represented by no less than two hundred different entities), and regrouped during several different Governance (UPE, UNE, UEE), but still under the influence of the notion of Humanity.

Despite everything, this principle is severely tested by the tendencies of the Human to seek to identify with the local level, which creates social conflicts between factions which can degenerate into civil wars, often on only one planet, or by the demonstration an autarky linked to a strong planetary identity (a planetary patriotism, in a way).

Planetary star systems controlled by the United Empire of Earth.

Diplomacy with the Vanduul: Since their first encounter in the Orion system, Humans and Vanduuls have been waging a merciless war. The UEE diplomats tried well to approach the clans, but nothing could calm this cultural war which does not seem to have an end.

Diplomacy with the Banu: First race encountered during its ascent to space, it has always kept a cordial understanding with humanity, and a peace agreement in principle exists. The Banus do a lot of business, and this is a more than sufficient vector of understanding for the UEE.

Diplomacy with the Xi'an Empire: The meeting with the Xi'An was the most tense period in the history of the UEE. Messerian totalitarianism weakened relations with the Xi'An from the first contact, triggering a long period of cold war leaving a constant doubt of open war. With the advent of the UEE and the fall of the Messers, this period came to an end for the more pleasant and peace-loving period we know today.

The Human is a race which is not particularly interested in war, but which is always ready for it. The principle of the official army is devolved to the public organization, the government which manages the political affairs of the species, but paramilitary groups created by private entities often emerge.

In times of war, the tenacity of the Human in the face of adversity is indisputable. He adapts to the strategies of his enemies, and uses a plurality of methods which do not stem from a particular warrior culture, but from adaptability to the situation he encounters. He is rarely satisfied with defeat, and the adrenaline of war can lead him to atrocities which he is the first to condemn when the dust of battles settles down.

Individuality is as much a need as a principle which has always led the human species in its development. The Human tends to reject the globalized system and does nothing but be satisfied with it. It is driven by ambitions that go beyond the principle of common interest, altruism being a feeling very little present in the spheres of power. Thus, his company is based on a privatization proportional to the resentment of the population towards his government.

He thus attaches great importance to freedom, his own (as an individual) before that of others, above all, which leads to an important tendency to take the path of illegality.

Failing to adopt a species consciousness, the Human invariably tend to seek a local identity. Thus, planetary patriotism often emerges from prolonged residence on a planet.

Human lives in a globalized and highly privatized society. That said, it is very multifaceted, a characteristic which stems from its original cultural plurality, and which has shaped human consciousness in various ways. Thus, the adaptability which he demonstrates leads to the evolution of society on the planet concerned according to dogmas and local principles established slowly over the years. A newly created planet will function on the general societal principle of the UEE, but will slowly establish its own habits and customs based on the acclimatization to the planet to its way of life (whether by its use (mining, agriculture, industry) , ...), its climate (cold, hot, temperate, ..), its planetary governance, its ideals, ...

The planets, unlike the Xi'An, are thus not terraformed for a single purpose, but on the sole principle of the extension of domain and territory. Future use only results from the exacerbated presence of this or that particularity. 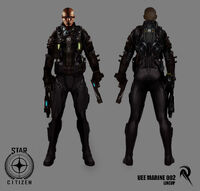