Link to ARK Starmap on robertsspaceindustries.com/starmap?

The Horus system is a UEE controlled single star planetary system that has three planets and four Jump Points and was part of the Perry Line. Horus was officially discovered in 2528 by the navjumper Marie Sante after she spend time charting the system, she also discovered the Jump Points to Rihlah in 2542 and Kai'pua in 2617.

Maintaining the nickname Sante gave it in her original reports, this tidally locked planet contains one of Humanity’s most interesting habitats. With one side of the planet perpetually facing the system’s main sequence M-type star and the other shrouded in darkness, the majority of the planet is unfit for habitation. Yet Humans discovered that life was possible along the terminator line, the narrow strip dividing the light and dark side of the planet, running from pole to pole. Visiting Serling is a must for anyone interested in truly unique vistas, but living under such conditions is not for the faint of heart. Serling is plagued by constant storms, a meteorological side effect of one side of the planet receiving all of the star’s heat. Photographers flock to Serling to snap a pictures of the system’s red star sitting upon the horizon amidst a severe storm. This majestic and surreal image has become emblematic of the entire system. It has taken some ingenuity to make a manageable living in a place either constantly light or constantly dark (depending on which side of the terminator line one is on). In general, workplaces are zoned closer to the light side of the planet while residences are built near the dark side. This allows people the semblance of a normal day/ night cycle. A system of high-speed trains and transport ships constantly moves workers from one side to the other. Since businesses on the light side, technically, never close, there is work aplenty for those who want it. Yet, some residents suffer psychological strain from the lack of a natural circadian rhythm similar to what many tourists feel upon arriving on a new world. Currently, the University of Aten, Serling’s most prominent educational institution, is conducting a lengthy study in an attempt to isolate the differences between people who flourish under these conditions (often those in families who have lived on the planet for generations) versus those who have trouble adjusting. As in most places around the Empire, those with unlimited means make the most out of even these unusual conditions. The planet’s most expensive real estate lies in the middle of the terminator line, which provides a breathtaking permanent sunset view when facing the star. Stunning architectural homes, apartments and high-end hotels are programmed to rotate on a “daily” schedule, providing their residences with the semblance of a more normal day/night cycle.

A massive desert world located within the green band. Even though the planet lacks any natural bodies of water, UEE surveyors and scientists are seriously assessing the cost-benefits of a terraforming attempt. As xeno-economic relations continue to strengthen and improve, there has been considerable support from the business community to pursue settlement on this planet, simply because companies without a foothold on Serling would love to establish operations on a more traditional planet and enjoy easy access to the Xi’An Empire.

Horus III is one of the few Super Jupiters in UEE space. Its high-density atmosphere makes the planet many times more massive than most other gas giants. Separated from Horus’ inner two planets by two asteroid belts, Horus III sits in a long, lonely orbit far from anything els in the system. 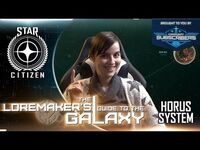