The Hercules Starlifters from Crusader Industries is a series of cargo space ships designed to transport large scale freight, outfitted with a drive through cargo bay it is capable to transport vehicles the size of a Nova battle tank. It is available in three variants that range from military needs to civilian use.

The A2 Hercules is the military bomber with the highest amount of turrets and its cargo bay features a bomb bay that can deploy a size 10 bomb.

C2 Hercules is the civilian cargo hauler, it comes with the largest cargo bay, but also has the least amount of weaponry.

The M2 Hercules is the military transport, with 522 SCU cargo capacity it has 25% less cargo capacity then the C2 but has one additional front mounted turret. And its armory can accommodate a 12 person auxiliary crew, including armor and weapons. 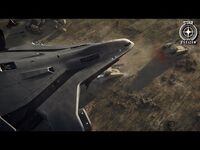