Most ships are stored in hangars when not in use. There will be four tiers of hangars available at launch, and the hangar a player receives is based on what ships they have bought,[1] and will be customizeable to a limited extent.[2]

The initial hangar release did not include Oculus Rift support[3], however it was promised in a future version.[4] Hangar patch 11.1, released on February 26, 2014, included that support.[5]

Hangars were temporarily upgraded to Deluxe versions to display the two The Next Great Starship finalists on June 6, 2014.[7] 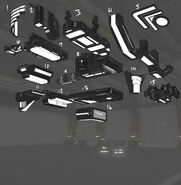 Retrieved from "https://starcitizen.fandom.com/wiki/Hangar?oldid=61494"
Community content is available under CC-BY-SA unless otherwise noted.