The Hadrian system famously known as the No Man’s Land where the bulk of the warships of the UEE and Xi'an fleet maintained their stalemate, Hadrian is now one of the most famous checkpoint systems for pilots traveling between UEE territory to Xi'an proper.

Anyone traveling through Hadrian can expect to be scanned at least three times: by an initial human patrol, by a combined customs patrol near the inner system and then by a Xi'an force holding station at the other side’s jump point. Smugglers interested in bringing anything illegal into Xi'an controlled space would be advised to avoid Hadrian.

Pilots are advised not to wander off the buoy-marked space lanes, unexploded anti-ship space mines are commonly discovered in the system. 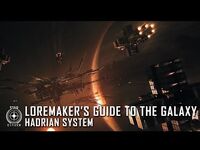