The Hades system is named after the now extinct species, the Hadesian, which left behind a system with heavily destroyed planets. Three planets are scorched by weapons with a destructive capability unknown to humans and Hades IV, better known as the Half planet, has been split apart into two parts.[1]

Though not officially part of the UEE, preservation groups still patrol the system in an attempt to stop looting. These pilots are well-intentioned but naturally suspicious of any ship they spot. It’s best to comply with their requests, otherwise they’re apt to assume the worse about your presence in the system.

Astronomical considerations suggest that this was once a lush, tropical planet, due to its proximity to the systems star. Today, however, Hades I is a hellscape, so thoroughly destroyed that only imprints of ruins and craters remain. As with all the other planets, the exact reason is to date unknown.

A highly geologically active Planet, Hades II's remaining ruins are difficult to access. Volcanoes are a looming threat, covering most of the ruins in thick layers of ashes. Another threat is the very harsh atmosphere, with storms, tornadoes and lightning strikes abound. Many surveys have been conducted here, though the hostile environment has limited their success to a minimum so far.

This smog planet features a very toxic atmosphere, which is also very thin. Partly because of this, the ruins of Hades III are well preserved, compared to those of the other planets. Surveys discovered that the people that lived here were of a roundish stature, bigger than humans, with tentacle-like appendages. However, because of the toxic atmosphere, special equipment that is required to conduct research here has made expeditions expensive and therefore limited in numbers.

Hade's famous "half planet". This world was split in two halves by an unknown force. Speculation that claims the planet was destroyed by a weapon of giant proportion has arms manufacturers on the lookout for mercenaries that are willing to conduct research in this matter. Research towards such weapons of mass destruction is considered illegal by the UEE. 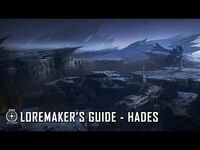