Goss system is a binary star system with two orange dwarfs in its center and three inhabitable planets in the green band.

Like the Grand Canyon on Earth or the Magnetic Ridge on Terra, Goss exists first and foremost as a tourist destination, with little to offer those not interested in taking in the sights. Goss was initially settled by a plethora of naturalistic religious groups, likely motivated by the belief that the system’s majestic nebulascape would allow them to better commune with their deities. As a result, the population today prides itself on its self-sufficiency, producing their own goods with little excess. The end result is that Goss is no place for a bulk trader.

Since the Goss system is largely self-sufficient and does not produce a large surplus of goods, bulk traders will have little business here. Small-haulers however can load up on hand-made Gossian goods, assorted tourist knickknacks. Licenses to ship live animals are few and far between; there is a teeming black market for anyone willing to ship expensive fish off-world.

The Olympus Pool has dark side, too: the same nebula that delights tourists also acts as an effective curtain for several deep space pirate clans. It is believed at least one standing pirate facility exists within the Pool. Pirates are generally careful not to interfere in the tourism on Cassel… but the brilliantly colored sky is believed to hide multiple clan operations facilities and supply chain master points.

WARNING: Gravity effects of the binary star have rendered portions of the system untenable to starships not carrying Level 7 shields or above. Consult current gravity maps before attempting transit!

Goss I is a resource-rich world, which produces 98% of the resources required to sustain the rest of the system; almost everything produced is shipped to Goss II and III. Unusually, Goss I has almost no ocean, and the ocean that does exist is almost devoid of life. Attempts to introduce aquatic life from other planets have failed. Goss I is a low-atmosphere world with abundant heavy metals. Scattered pockets of well-paid miners are a reasonable market for luxury goods and black market items, although the systems’ strict export policies prevent shipping raw materials out-system.

The main destination inside the Goss system is the lush, thriving resort world of Cassel. The surface is largely tropical rain forests dotted with stately pleasure domes constructed to support tourists and dozens of launch arcologies that house the descendants of the original Goss settlers.It is most famously home to the Midas fish, a naturally golden animal which has become symbolic of its home world and prized in fish tanks throughout the galaxy. Other native creatures include the eerie lang crab and the mammalian z-whale.

Goss III, a small sub-tropical world, is the acknowledged property of the UEE. The planet is largely undeveloped, although it is home to a mid-sized naval refitting base and a large military hospital complex on Goss III, the ultimate destination for warriors wounded in battle with the Vanduul. Goss III is generally closed to visitors, although anyone who has business with the military facilities established there can acquire a landing pass with relative ease. 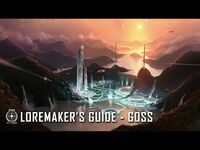