Gliese is a six planet system with three asteroid belts with plentiful resources. Center for a lot of Banu trading. Humans first official visit was in 2712, due to trade negotiations. This was due to complicated negotiations with the Banu Soulis. Many interests had to be negotiated such as the items below.

Political Soulis are supported by the rest of Banu society but are separate entities. All soulis with interests need to be accommodated in a negotiation, though.

The navigation Souli owns the maps and software that runs the Nav systems on ships.  This is proprietary information, and is a closely held secret. This complicated the trade deals, along with the mining guilds and other trading guilds who wanted to maintain their current trading organizations and deals.

The first humans to make a deal to visit were actually attacked by a mercenary Souli. The misunderstanding was because the Souli that the humans has negotiated with had dissolved, so the deal was void.  Hence the humans had no right to visit and trade. Negotiations are hence frustrating.

The length of negotiation was further exacerbated by our initial and not-so-warm contact with the Xi'an and the Tevarin.  These Cold and Hot wars interrupted trade negotiations.  Especially with the Messer regime.  This changed with Messer VIII, who valued expanding trade routes in the rest of the Galaxy.

Iron planet, superheated and hyper-magnetic.  Sometimes people travel here to relieve pain in cybernetic limbs, though there is no medical evidence that supports the treatment.

An active mining zone, which includes some violence which is rare for the Banu. A trade war in the belt. Most fighting is hired-out to mercenary guilds.

Nogo is a mysterious planet. Orbited by the Lyris

Gas Giant with thick water vapor. Condensers collect the water, including some human corporations. Some controversy surrounds the reported use of indentured servants to assist with mining.

Tradition for new Soulis to leave luck offerings here. Some religious Soulis operate here and pray on the behalf of others.

An active mining zone, which includes some violence which is rare for the Banu. A trade war in the belt. Most fighting is hired-out to mercenary guilds.

Mostly mined out, but some equipment remains.

A partial belt. Dangerous reputation due to mining conditions and distance from normal trading. 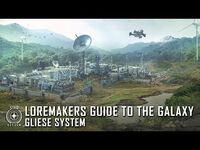