The Garron system is a single star system with four planets orbiting a Yellow dwarf.

In 2792, Imperator Linton Messer XI sold off the terraforming rights of Garron II to the Bright Worlds Terraforming Group (BWTG). One of the indigenous species, which had shown sentience and was known to both the BWTG and Linton Messer, was exterminated during the terraforming process. An anti-Messer revolutionary group called Tide obtained footage documenting the atrocity and released it over Spectrum, interrupting broadcasts galaxy-wide. The vids sparked an outrage among the long-oppressed population of the United Empire of Earth (UEE). Subsequent riots and military action led to the end of the 246 year Messer dynasty.

Those visiting Garron should be aware that the whole system has extra environmental protections in place to prevent additional contamination of Garron II. There are strict fines for littering and all ships are expected to properly dispose of waste at designated reclamation centers.

Garron I is a uninhabitable lava planet orbiting extremely close to the system's star.

An ice planet located well outside the system's green band.

An uninhabitable rocky planet located far from the rest of the system.

A station placed near Garron II, OB Heller houses the scientific teams working to restore the planet, but the station also acts as an ecotourist site to educate and inform people about terraforming, the Fair Chance Act, Humanity's responsibility and the Synthworld. 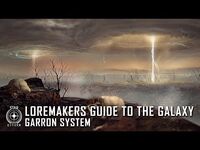