The Ferron system is a single star system made up off an F-type main-sequence star with five planets in its orbit and it also has three jump points near the star. All planets except for Ferron IV are inside the system's green band.

In 2791 near the end of the Messer Erra, an inhabited moon in the Ferron system played host to a large settlement of ex-patriots hoping to escape the chaos of the crumbling empire. Bomber Squadron 78 was tasked with destroying the settlement suspected of being the hiding place of radicalized rebels. The squadron refused to bomb the settlement, saving the inhabitants, and spent the next 18 months in the stockade until being freed and hailed as heroes by the new government.[1][2] 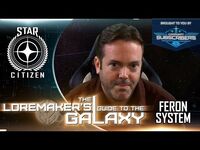