Concierge (Wing Commander)
The F8C Lightning is a small 1-person heavy fighter and is the civilian variant of the F8A Lightning from Anvil Aerospace. It is a reward reaching the Concierge level Wing Commander[1] and will also be able to be purchased in the Persistent Universe after completing a yet unspecified task in Squadron 42.[2] It has six weapon hardpoints, one turret mount and two missile racks.

Polished rendering of the F8C Lightning

Polished rendering of the F8C Lightning 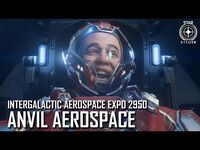