Davien is best known for being the location of first contact between humanity and the Banu. It was discovered by Wendell Dopse via a jump-route from Croshaw. The system has a K-type star orbited by four planets, only one of which (Cestulus) is inhabitable, and was originally seen as being destined to be a backwater.

First contact with the Banu came in 2438. Vernon Tar opened fire on a spaceship that he believed was trying to jump his claim on the system, but which turned out to be a fugitive Banu Merchantman fleeing from the core Banu worlds. Contact with the Banu led to rapid development of the system, which rapidly became a centre for interspecies trade; Cestulus became one of the most populated human planets in the galaxy.[1][2]

Davien I has no useful minerals and no core. There are no recorded landings in the past five centuries.

Cestulus' terraforming was completed in the early 26th century. Due to its thin atmosphere, the majority of human habitation is underground. With no useful minerals, the Cestulan economy is built around transport and shipping. Aegis Dynamics' corporate headquarters are based on Cestulus.

Davien III is an acidic world, with no resources worth the risk of establishing a colony. It is rumoured to be a dumping ground for victims of killings by organised criminals. 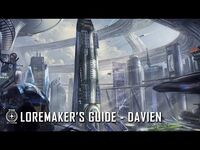