65.00 $
The Cyclone-MT is a ground combat vehicle manufactured by Tumbril Land Systems. It can hold two persons in the cockpit and one person in the turret. The turret features a size 1 ballistic cannon and two - size 2 missile racks. The MT was revealed on March 11th, 2021 during Inside Star Citizen: Driving Force - Winter 2021 and later announced to be sold during the St. Patrick's Day 2021 promotional campaign. It was later released in Alpha 3.13.0.

Cockpit
The Cyclone-MT features a Cyclone typical open cockpit for two people. The driver and co-pilot have a gun rack located next to their seats.

Armament
The 360 degree rotating turret is mounted in the back of the vehicle, it features one size 1 weapon hardpoint that is equipped with a 9-Series Longsword Cannon, and also two size 3 missile racks that can each be loaded with two size 2 missiles.[1]

View over the shoulder from the turret gunner

Cyclone-MT loaded into a Cutlass Black 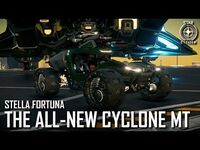