150.00 $
The Cutlass Blue, manufactured by Drake Interplanetary, is a medium size Interdiction ship. It features twelve holding cells for the transportation of Bounty Hunters' prisoners, a quantum dampening module that prevents ships in the vicinity to start a quantum jump and a tractor beam.

The Cutlass Blue is the "police edition" of the Cutlass variants and features blue and red emergency lights on the exterior,[1] it was released on the 22nd May 2020 with Alpha 3.9.1 simultaneously with the start of the Invictus Launch Week 2950.

The standard equipment of all Cutlass variants includes two beds, four weapon racks and two coat hooks, the loading ramp capable of loading small vehicles such as the Buggy.

The dedicated interdiction section located in the center contains twelve prisoner cells and airlocks on starboard and port side. The Copilot currently servers no purpose.

Habitation room with 2 beds and the turret seat 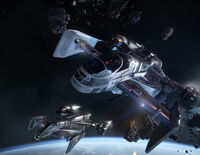 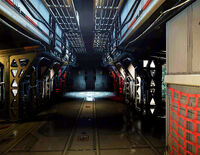 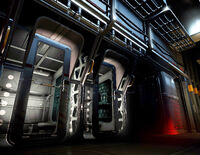 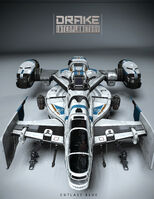