The Croshaw system is a single star system controlled by the United Empire of Earth, the system consists of four planets, two asteroid fields and has four jump points. Croshaw is of historically high value, because it is the first star system visited by humanity by the means of interstellar travel.

Humanity's "Gateway to the Universe". In 2271, Nick Croshaw successfully traversed a jump-point as a first human pilot and discovered this new system, which was named in his honour.[1] The ramifications of this discovery didn't end there, as the bureaucracy needed to colonize the system caused such debate on Earth that it lead to the creation of the UNE. The system has been a consistent player in humanity's social and political development ever since.

This planet is currently only known as Croshaw I. A smog planet currently uninhabitable and because of the planet’s thick acid-based clouds that creates an atmospheric mass, makes it impossible to land on. The planet is under affiliation of the UEE.[2]

The first planet terraformed and colonized by Humans in another star system, Angeli unfortunately suffers from heightened tectonic activity. Geologists theorize that there will be a devastating earthquake in its future. Nestled between the mountains and the sea, Angeli’s city of Quinton features one of the most iconic skylines in the UEE.[3]

Slightly smaller than Earth, Vann sits on the edge of the Croshaw’s green band (habitable zone) and is perpetually cold. Its population dropped once more systems were discovered, but many people, especially those who enjoy the cold, still call it home.[4]

Croshaw IV is a large dead world that lacks both an atmosphere and valuable minerals. It's currently not habitable and is considered to be a super-Earth type planet. Croshaw IV is under affiliation of the UEE.[5]

The Daedalus Cluster is one of the oldest active mining fields in the empire.

The Icarus Cluster is one of the oldest active mining fields in the empire. 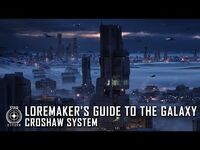