Gateway to the Banu, Corel is a standard type G main sequence star with six largely unremarkable planets located on the border between the United Empire of Earth and the Banu Protectorate, with a key jump line connecting the two. First discovered in 2449 and initially settled shortly thereafter, Corel has become the de facto customs checkpoint between the two states.

The system itself was discovered in the decade following mankind’s first treaties with the Banu, as part of a concentrated effort to map this inhabited region of space. The inhabitable third planet, Lo, was developed first as a casual trading post between Humans and Banu and then ultimately developed into the port of call for all interspecies shipping traffic. The culture of the Corel system is an interesting mix of Human frontier and Banu bureaucracy, something that has not evolved elsewhere in the galaxy. Corelians today are an unexpected combination of efficient and laid back. Beyond that, in nearly five centuries since the system’s settlement, little has changed save the scale of what passes through the jump point. 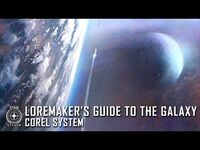