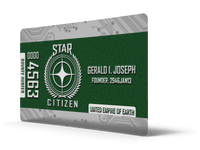 Citizen Cards are both digital and physical items in various colors that were given out in a limited time during the Kickstarter crowdfunding campaign. The color of the card is depending on the total amount that was spent ("pledged") while the campaign was active.

In the game, these cards will show your pilot's citizen status, social standing, credit account and more. The physical card, is a wallet sized card that is a certificate of a contributor's support of Star Citizen.

Cloud Imperium Games Corporation intended to deliver the physical cards by Christmas 2012, however due to delays with integration of Kickstarter pledgers into the official website (www.robertsspaceindustries.com) the cards weren't shipped then.

The deadline to submit information to receive a Citizen Card was set to 16th February 2013.[1]

It was possible to upgrade the Bronze Citizens Card and Silver Citizens Card from a plastic card to a metal card for a limited time.[2]