Site of the infamous Synthworld Project. Chosen because it’s a sparse, vast, empty system. The planets Chronos I & II are dead worlds on an orbit very close to their sun. An ELE destroyed the planets on the outer half of the system, offering the perfect opportunity to design the Synthworld’s distance and orbit from the sun for optimal planetary conditions.

When the project began, there was a lot of traffic in and out of the system, but now, money and enthusiasm has waned. Deemed by some as an embarrassment, a financial vampire by others, the SynthWorld stands as a half-constructed monstrosity that most doubt will ever be completed. The government is still struggling to make the project a success.

Though its star has fallen, the SynthWorld Project is still an excellent place for traders to offload raw materials. With the proper bribes, contractors can bring in heavy metals, construction equipment and shipped labor to be sold at inflated government prices. Those who live outside the law should be wary: there may be no place in the galaxy worse for conducting illegal business. The UEE Navy's elite 18th Battle Fleet is on permanent station at Chronos and have spent years with little to do aside from practice their aim.[1][2]

Archangel Station is a hub for scientists and engineers and main transshipment point for Synthworld. 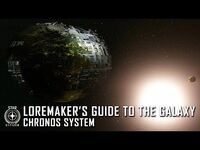